Since buying our average sized Semi-Detached house, one of our projects was to redesign this relatively small irregular shaped garden and turn it into a manageable, kid-friendly garden and here is the outcome ….so far… ..!

As you can tell below the previous owners were not keen gardeners so the garden was pretty bare filled with large Rattan furniture…. covering the ugly cracked cemented ground.

The only negative we noticed when viewing the house was the garden, the size of it and that fact it was overlooked BUT the location of the house sold it to us, since being on a quiet road, 5 minute walk to the  Christchurch river,  15 minute walk to Southbourne Sandy beaches, as well as a huge playing field 2 minutes walk away, and great local schools walking distance.

The garden had an existing patio area and a large concrete area where originally there was a garage built and knocked down. The lawn (what there was of it)  was very lumpy as well as patchy and the whole shape of the garden was an awkward triangular shape.

We also wanted to create corner feature for the seating area since this is where we will be sat most of the summer months, so we raised the decking to a higher level where the sun sets down also a great sunbathing area.

As you can see the rest of the ground surface was left with mud and stone since … a mess… so since having 2 young kids and me being a tidy freak we decided upon covering the rest of the surface with artificial grass …which meant YES …..NO MUDDY footprints through the house!!!!

As mentioned before we were not keen on being overlooked by the other house so we wanted to create a  shield, so firstly we built a large angular planter made with railway sleepers ( bought from Travis Perkis ) along the back fence line and planted 30-litre pots of Bamboo (bought from Homebase).

We also created an edging feature on the left-hand side and filled the this with Scottish pebbles to give the garden a beachy look and a place to put my bench.

Over all, we are pleased with the outcome since the garden is manageable and kid friendly!

Next project is to accessorise the garden in my love of Moroccan style features …Watch this space….! 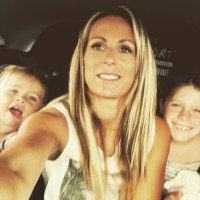 Find me on: Web

Hey! Welcome to our blog. We are two mums (Kelle & Eleanor) from the South Coast. Both juggling life, motherhood with two girls (aged 2 & 8) and running our own businesses around family life. We love coffee, food, fitness and living life to the max! Good Vibes Only.
Thanks for visiting our page :)

Since buying our average sized Semi-Detached house, one of our projects was to redesign this relatively small irregular shaped garden…